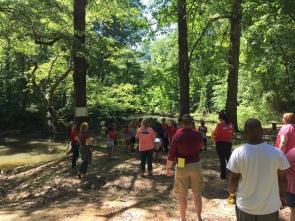 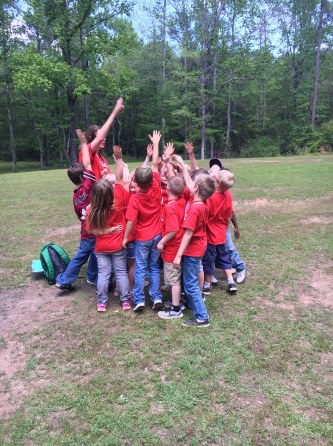 Hey kids (and kids at heart), you can ask Camp Fletcher’s camp elf Twinkle Loblolly a question or just drop him a note to say hi.  Twinkle would love hearing from you. His e-mail address is twinkle@campfire-al.org.

We have a serious problem and you need to fix it. One of your field trip facilitators has gone rogue and you need to take disciplinary action immediately. I’m referring that man (Mr. Hank, I believe his name is) who often leads the nature hikes for school field trips.

We had a group in this week from an elementary school in Gardendale, and that big, affable dunce leading the nature walk included the stupid elf among his listing of the creatures living at Camp Fletcher. By the end of the day we had scores of highly impressionable second and third graders (and a lot of their parents too) spotting elves behind every tree.

The school came to Camp Fletcher to learn about the water cycle, not about elves. I’ll admit that the feedback forms said that Mr. Hank did a good job of explaining how the streams and creek they saw on their nature walk are part of one of the richest and most biodiverse ecosystems in the world, so it’s not a total disaster, I suppose. But mentioning Twinkle Loblolly destroys all of his (and by extension Camp Fletcher’s) credibility. Could you get it into his thick skull that elves do not exist, no matter what he thinks he’s seen on his walks through our woods? And those notes and the other things that imaginary mythical creature has left for him to find are evidence of nothing more than a tiresome prank his colleagues are playing on him.

The bottom line here is that the only purpose of our field trips is to teach children science. We don’t need to be sparking their little imaginations or allowing them to have too much fun while they’re with us. We need to stick to the mission at all times during our field trips.

I need you to have a stern conversation with Mr. Hank forbidding him to speak of elves ever again, and I need you to follow it up with a strongly worded letter of warning that is to go into his Permanent File. After that, I would like you to circulate a memo to all of our field trip coordinators expressly banning the use of the words elf or Twinkle while on camp property.

On a related subject, I’ve observed way too much laughter from the children at our school field trips this spring.  Science is a serious, rigorous business, and the children are here to learn.  If the children are enjoying their days at Camp Fletcher as much as they appear to be, how much could they really be learning? Is there a way you could take some of the fun out of our programming? Perhaps you could replace some of the field trip facilitators you have now with people who are, um, well less likely to make the children quite so happy.

Don’t get me wrong, I don’t want all of the kids in tears at the end of the day; but it would be nice if they ended the day a little more sullen, a bit bored and much quieter than when they came through our gates in the morning.  The quiet part would be especially nice. As things are going now, there’s simply too much laughter and too many smiles at Camp Fletcher for me to be comfortable with our field trip programming.

Thanks for getting right on this important initiative to make Camp Fletcher less fun for everyone.

Have a nice day,